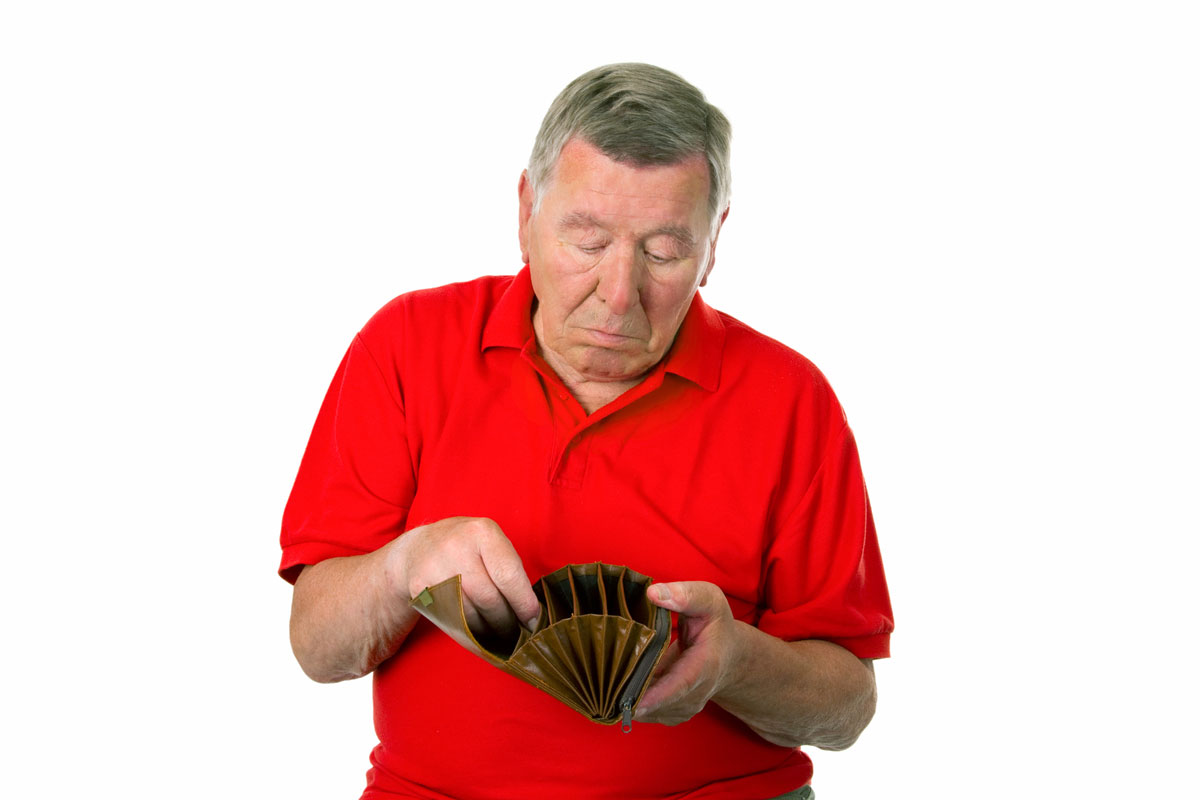 Older Americans are filing bankruptcy at a much higher rate these days. This phenomenon is everywhere; even in Arizona. Iit has been shown in the last 25 years or so that the increase in bankruptcy filing among those 65 years old and older has been remarkable. It’s unfortunate that our new generation of elderly are turning to bankruptcy at such an alarming rate.

What on Earth could be behind this trend? The statistics that have been recently reported only go back to the year 1991. This whole phenomenon could be just a function of only having a short time frame from which to derive a conclusion. However, assuming that this is a legitimate, historical increase in the filing of bankruptcy, it’s important for us to look at the cause and the effect of this surprising situation.

The American dream. It usually involves some idea about working hard at the right place for the right amount of years and then retiring when you reach a certain age and living it up. You can drive your golf cart from your back patio to tee #1 of the golf course. Or you can mosey on down through the lobby to the beach on a lawn chair to get some sun. Or you can just sit in that giant living room of yours watching cable TV and complaining about “Kids these days…” and how your grandkids aren’t being raised right by your children or your children in-laws. Or maybe you hop in an RV and get to dip a toe in every state in the United States including Canada since that darn place is in the way of Alaska. A lot of it is only a short drive from Phoenix, Scottsdale, Mesa, or Chandler. And if you’ve got your sights set on Mexico, it’s a quick shot from any city in Arizona.

We work hard to retire and enjoy the good life in our twilight years. Just ask people in Surprise, Peoria, and Glendale. It’s fun to look down our noses at all those poor schlubs who are still putting the nose to the grindstone and won’t nearly have as many toys as you do when they’re retired because you worked harder than they do, and you took a lot more garbage off the old boss and stuck it out anyway. And now, it’s time to live the good life. Besides, you’ve earned lording it over the others with all those decades of hammering it out.

So this is our conceptual swan song for the american dream. But it doesn’t always end that way for everyone. With this recently reported massive increase in bankruptcy filing among the elderly in our country, there must not be the materialistic paradise at the end of the rainbow for every retiree that Hollywood would like us to believe. After all, if your filing for bankruptcy you can’t have a lot of disposable income or assets lying around. Something must have gone wrong in your plan to live out the good life in relative ease and comfort in places like Gilbert, Goodyear, and Tempe. So what is causing this increase in bankruptcy? Let’s look at our elderly and see what’s changed over the last few decades.

Recent reports of this phenomenon site the shift from pension to 401k as a primary factor driving up the rates of bankruptcy filing among the elderly. No report however, is able to make a true causal connection between the two. So the connecting the dots between this retirement investing shift and bankruptcy is pure conjecture other than the fact that the two correlate in time.

A shift from pension to 401k sounds like a technical one. However, in essence it’s a shift from babysitting to personal responsibility. Back in the grand productive days, a key goal in life would be to pick a company and work there for decades because they had an oh so generous pension plan. Much of this romantic concept has been subverted over time due in large part to a lack of loyalty by companies towards their employees. Corporations of course, would have you believe that employees lack the loyalty they once possessed. This is a chicken-and-egg argument. Most free-thinking individuals would likely agree that large-scale layoffs, along with the firing of senior employees as a cost-saving measure, in large part has caused this lack of loyalty.

The upshot of all this is a more fluid workforce. It also works both ways because companies have, over time gotten away from providing pensions which were perpetually a key incentive to stay at a company. The shift away from pension to 401k was a clear cost-saving measure by Corporate America that removes the incentive for many employees to say with one company indefinitely.

The combination of 401k’s replacing pensions and the lack of employees sticking around to collect a pension gradually changed the retirement investing landscape to the 401K and IRA. Without a pension (in most circumstances) employees were forced to choose to make their own contributions to a 401k. This is where the personal responsibility component enters into the equation. It is so much easier to mortgage one’s future and have extra disposable income than to set aside more in a 401k for retirement day. Anyone with a basic concept of human nature would clearly see that putting retirement choices squarely in the hands of the individual lends itself to an overall decrease in available retirement income. If anyone disagrees, study the history of the social security system.

A contributing factor to the increase in bankruptcy filing among the elderly Is the increase in healthcare cost, at least according to the recent articles about this subject. It would be difficult for even a doctor to argue that healthcare has gotten less expensive or stayed reasonably priced. This is an unfortunate fact of life. Discussing issues like national healthcare, malpractice suits, insurance and the like would require its own blog entry if not several. Suffice it to say, the elderly face an increase in healthcare cost. Any catastrophic medical condition, (or even the everyday co-pays faced by the elderly who utilize medical services more than anyone else), could be enough to drive someone to the brink of bankruptcy and beyond. Figuring out how to provide health care at a more reasonable cost to the elderly could single handedly reduce the need for filing bankruptcy among our current elderly.

Here is an interesting little five minute exercise for you. Pick a state and have it displayed on Google Maps. Then type in the word “Casino.” Did you ever notice how many casinos there are in the United States these days? And who do you think is the number one age group that visits the casino? It’s the elderly. This on its own could indicate an overall shift in the value of money by the current generation of those over 65. Do we know if this is a contributing factor for sure? No. But it cannot be helping the situation.

The generations prior to our current generation of retirees grew up in different circumstances. Our current generation comes from primarily the baby boomers. But before we look at them, let’s take a look at who was eligible to file bankruptcy as an elderly person back when we started paying attention to these statistics.

The first group was the group that grew up during the depression and then also fought in World War II. Granted, we are speaking of stereotypes, but that generation was notorious for being careful with their money and not acquiring too many assets, especially on credit.Most of us would agree that if we grew up in the same circumstances that they did, we would be very careful about spending our money.

The following generation overlaps with the previous one. But they spent some of their time growing up during World War II during the time of rationing. This generation on the tail end of the depression also is notorious for being careful about saving and not spending.

And that brings us to the baby boomer generation who make up our current retirement group. These people grew up in a much more affluent version of America. They are known for spending and living the good life. Again, these are generalizations and there are exceptions but let’s take a look at some cultural shifts that came about contemporaneously with the baby boomer generation to show that in general. they spend more money and save less.

Eating food at restaurants rather than eating at home has increased dramatically as baby boomers have grown up and have had children of their own. There are many contributing factors to this such as the busyness of families, the fact that both parents work more often than ever before, and the like. But whatever the cause, the effect was that it became customary to eat many dinners out of the home as a family and to eat lunch at a restaurant during the workweek instead of brown bagging it to save money. There is no country on the planet that has as many restaurants as the United States nor is there a country that eats food at a restaurant as often as we do. The generations prior to the baby boomers ate out only on special occasions. This is why the vast majority of restaurants in days past we’re sit down affairs primarily serving dinner. The rise of fast food and later fast casual dining is due in large part to a cultural shift towards eating out on a regular basis. In fact, this eating out at least once a day has become a primary hobby of many retired couples. Oftentimes their daily existence revolves largely around picking a restaurant, eating at the restaurant, and then eating the leftovers the next day. The whole decision process starts again the next day and becomes the core purpose for their existence.

Just these few cultural changes show the shifting attitude toward spending money within the current generation of retired people. This, coupled with the fact that the elderly have been saving less towards retirement and are now paying more for healthcare could account for why there is such an increase in bankruptcy filing for the elderly. But there is one more potential reason that bankruptcies have increased.

The economic downturn of the mid-2000’s and especially the housing crisis at the same time forced many people to file for bankruptcy regardless of age. This staggering increase in bankruptcy created a cultural shift of sorts. Bankruptcy finally became something that was relatively socially acceptable for most people because they were either forced into bankruptcy themselves or knew someone intimately who filed. Bankruptcy was no longer the “B” word.

A large part of the current increase in bankruptcy filing for the retired could simply be the fact that people don’t try as hard to avoid it these days. Maybe they don’t mind that people know they have filed for bankruptcy. With so many others filing over the years, they likely have people to turn to who have experienced it themselves. It could simply be that in previous generations the stigma of filing bankruptcy forced retired people to try to avoid filing at all costs even to the detriment of their personal and financial well-being. Maybe now, retired people don’t feel shame and pressure when it comes to filing for bankruptcy and so they choose to file when it financially makes sense rather than avoiding it at all possible costs.