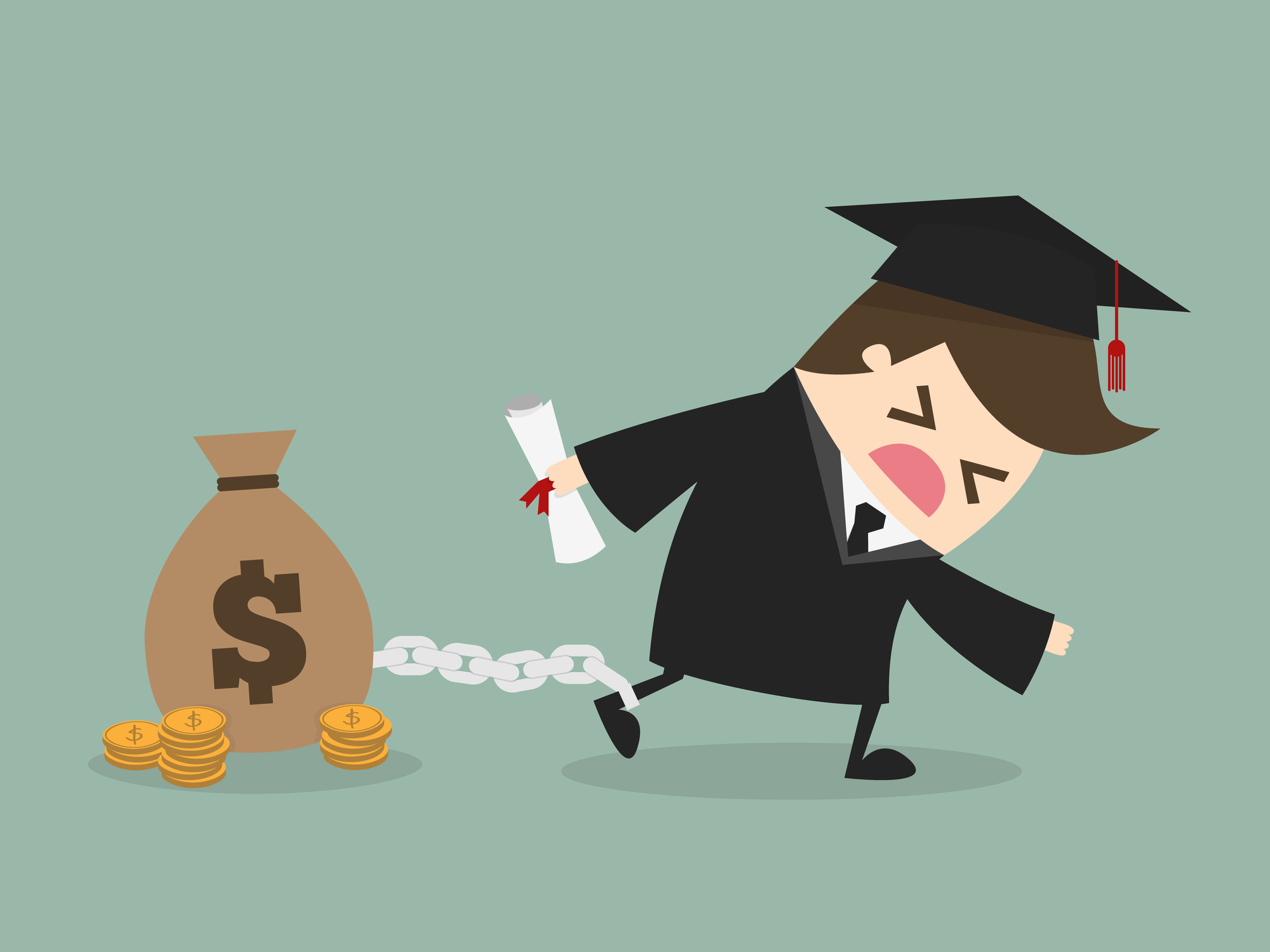 Death, taxes, and student loan debt. Guess which two of the three are completely unavoidable?

Having a hard time?

It’s probably because they are all, virtually unavoidable.

Why do I say virtually?

Well… depending on your view of religion and the afterlife, there have been or may be some people who have or will avoid death.

Taxes are actually avoidable, although it takes a tremendous commitment to avoid them.

Now this list is not all-inclusive, but here are some options.

You could live on a floating platform in the Pacific and form your own government – or have no government at all.

You might consider going to prison for something illegal. Most prisons require able-bodied people to work while they are there, but your income will probably fall below the mandatory filing amount. Of course, if you aren’t able-bodied, then you don’t have to work. Just don’t buy anything at the prison commissary unless you are lucky enough to live in a state where the commissaries don’t charge sales tax.

So that brings us to student loans. It’s surprisingly difficult to get out of paying your student loans. Of course, when you’re six feet underground, you are finally set free of the bondage of student loan debt. But is there another way? A better way? A way that favors the living?

The Current State of Affairs

In a state like Arizona, student loan debt is everywhere. If you interview a few people in a place like Phoenix, Scottsdale, Mesa, or Glendale, you are likely to find at least one who owes money on student loans. And not only do they owe money, they probably owe a lot of money. Student loans are incredibly easy to qualify for. Federal student loans are need based, so if you need money for school and don’t have a bunch of cash tucked away in a savings account or a trust fund, you’ll have no problem qualifying.

Not only can you get money for school, you can get a lot of money for school. College, after all, is expensive. And it keeps getting more expensive every year. The federal government wants to make it easier for people in towns like Glendale, or Surprise to be able to have enough money to afford that massive tuition, along with overpriced books and skyrocketing living expenses. Student loans are there to save the day.

With what college costs this day and age, it’s unreasonable to expect that someone would work to pay all their expenses. Your focus is supposed to be on college, not working. And once you get over 12 credit hours, the rest of your credits are free for that semester. It just makes sense to take 18 or 19 credits to save money. If you’re taking that many, there’s no way you are going to get very good grades or even pass your classes while working to pay for college.

Another alluringly useful feature of student loans is their low interest rates. You can take out a large sum of money at only a tiny bit of interest. Some people take out student loans for the maximum amount they are allowed even if they don’t need that much, just because the interest rate is so low. It sure beats the interest on a title loan or payday loan.

Deferral programs make paying the student loan back much easier than other loans. As a means of mortgaging your future, you can often take out loans for years and years while in school without paying a penny of it back. When you finally graduate, the payments sometimes kick in only gradually – allowing you to not have to pay the full payment when you begin repaying your loans. It’s a nice way to ease yourself into the monthly payment as you work your new, post-college job. While making your payments, if you lose a job or are underemployed and are making less than what you deserve based on your education, you can get back into deferment status until you are on your feet again.

The ease of getting lots of student loans has caused a virtual epidemic in Arizona as it has throughout the rest of the country. It has been recently reported that in Arizona alone, people owe almost $23 billion in student loans. That’s billion with a “B” by the way. What would the local economy be like if instead of all that money going to student loans, it was spent at places like restaurants and retail establishments. It would be a boon to the economy in your town for sure. Let’s hope that at least your local colleges and universities are making money hand over fist, since that’s where all of your student loan money is going.

Are Things Going to Change?

Tuition is constantly on the rise. In the last 15 years it has been reported that the increase in tuition has far outpaced any increase in the average income of Americans. This means affording school is going to be more and more difficult without… you guessed it… using student loans. So, the chance of student loans being less necessary in the future is highly unlikely.

How about the chance of school tuition going down?

This has been a hot-button issue in the political arena. Recent elections have had candidates talking about making state school tuition free for everyone just like it is in Europe. If this ever were to take place, school might get more affordable, but in the meantime parents with teenagers everywhere will be waiting impatiently.

All this means that at least for now, student loans are absolutely necessary for a large number of people in Arizona, unless they want to forgo an education after high school.

So, you’ve gone to school and gotten that degree. Or maybe you are one of those who went to school, spent loads of student loan money, but didn’t quite stick it out to the end. Either way, you’ve got a truckload of student loan debt that might take you 30 years to pay off if you extend out the payments as far as they’ll go.

If you student loan money was money well spent, then you’ve probably got the income to afford the payments. You might even be able to pay them off early.

But, what if your income doesn’t match your college student loan spending? Or what if you were doing fine post-college but now you’ve fallen on hard times. Is bankruptcy an option for you?

If you’ve got enough debt to make it worth filing for bankruptcy and your income will never put a dent in what you owe, then filing for chapter 7 or chapter 13 bankruptcy might be a good idea. For a lot of people in cities like Phoenix, Glendale, Peoria and Queen Creek, their biggest debt is their student loan debt. Wouldn’t it be nice if that could be eliminated in bankruptcy?

Unfortunately, the way things are now, if you want to file for bankruptcy, you’ll still be stuck with your student loans. There are some exceptions, but for almost every Arizonan, it’s next to impossible to eliminate your student loan debt in bankruptcy.

Department of Education to the Rescue?

Currently, if you want to eliminate student loans through bankruptcy you have to prove that you experience an undue hardship by having to pay them. However, the lawmakers who came up with the concept (a change spearheaded by Joe Biden in 2005) never bothered to define what an undue hardship is. Consequently, it was left to the court system to define it. Unfortunately, the courts took this idea and made it a virtually impossible standard to meet.

You have to be in a horrible economic situation to be deemed suffering an undue hardship. Not only that, it has to be an economic condition that will probably never change in the future. For example, if you went to school to become a surgeon and your hands were crippled in an accident, you would never be able to work as a surgeon again. Therefore, your student loan money went toward a career that is impossible for you to practice. This would be an undue hardship only if there wasn’t some other field you could pigeonhole your skills into. If the court felt you could still write computer programs for surgery robots, then you still might not be able to prove an undue hardship.

This leads us to the US Department of Education. Higher ups in the department are considering loosening the standards for what is defined as an undue hardship. The easiest way this can be done is to actually define what an undue hardship is, which was never done when the law was written so many years ago. As long as it’s defined in a more relaxed way than the way the courts have defined it over the years, it should be easier to eliminate student loan debt through bankruptcy.

How easy will it be?

Nobody knows at this point. No one from the department of education has released any detailed information regarding what standards might be established for what constitutes an undue burden for bankruptcy filers. Even if the department does decide to make it easier to eliminate student loan debt for people in places like Phoenix or Peoria, it still has to go through an approval process. We can only hope that the Education Department does decide to change the current rules and that the red tape required to make it law doesn’t get in the way.